Remember just a couple of weeks ago when the spokeswoman Jen Psaki said the White House put in place a plan that would keep buyers of Hunter Biden‘s artwork anonymous, so as not to raise suspicions of buying influence with President Joe Biden and his administration?

CBS News reported yesterday that Hunter expects to meet with patrons of his two planned art shows in New York and Los Angeles later this year. The dealer he is working with, George Berges, has said he expects to fetch up to $500,000 for Hunter’s works. The potential windfall raised concerns that Hunter’s new painting career would only serve to channel more influence-peddling for the Biden name.

From the CBS story:

Asked whether Hunter Biden would attend both events, Georges Berges Gallery spokeswoman Robin Davis said, “Oh yes. With pleasure. He’s looking forward to it. It is like someone debuting in the world. And of course he will be there.”

Davis also said that at the two art shows “everyone will be vetted…so, whomever is appropriate will be attending.”…

In response to questions about Hunter Biden attending the gallery events with potential buyers, White House spokesman Andrew Bates pointed to a July 8th statement which said, “The president has established the highest ethical standards of any administration in American history, and his family’s commitment to rigorous processes like this is a prime example.”

A source familiar with the matter told CBS News Hunter Biden will not discuss potential purchases, prices, or anything related to the selling of artwork.

But that raises the question: how would the public ever know what was discussed?

A former Obama administration official in charge of government ethics, Walter Shaub, has questioned the legitimacy of Hunter’s new career pursuit and the intentions behind it. He knows the Bidens aren’t fooling anybody.

“Is Hunter Biden going to walk around the art show with a blindfold on?” Shaub told CBS News. “It just goes to show you the focus isn’t on government ethics. It’s just showing the child of a president can cash in on the presidency.” 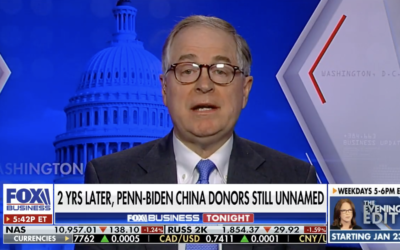