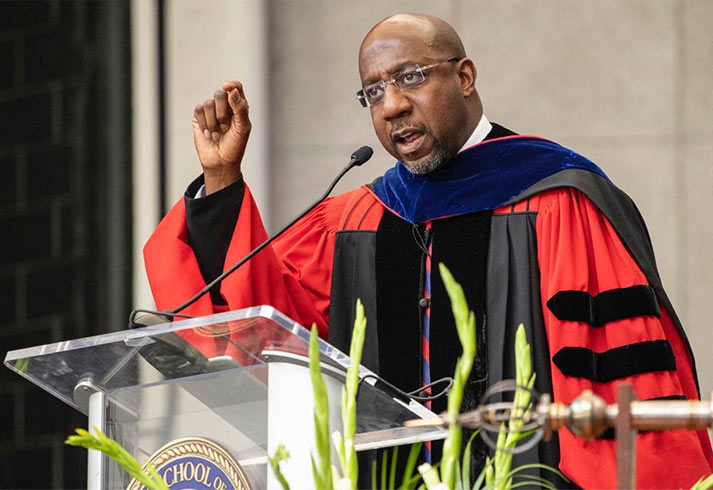 Andrew Kerr reports in the Washington Free Beacon that Senator Rafael Warnock (D-GA), who is in a tight re-election contest, gets a very generous housing allowance of $7,417 per month from the Ebenezer Baptist Church, where he serves as Senior Pastor.

At the same time, the church owns an apartment building where it plays hardball with poor and disadvantaged tenants who owe paltry sums in back rent, or who are late in payment by even a day.

The story raises some other questions, including why the church has apparently tried to hide or obscure its ownership of the apartment building, which according to NLPC Counsel Paul Kamenar, may be in violation of IRS regulations. From the story:

The church owns the building through a network of shell organizations connected to the Ebenezer Building Foundation, a 501(c)(3) charity that delegates all management duties to the church and identifies Warnock as its principal officer in its IRS Form 990 filings.

The church identified Ebenezer Building Foundation as the 99 percent owner of Columbia Tower in June 2022 when it requested $5 million from Georgia to renovate the building, according to a copy of the grant application obtained by the Free Beacon.

“The Ebenezer Building Foundation, Inc. an eligible 501 (c)3) corporation is requesting a grant in the amount of $5,000,000 for the rehabilitation of Columbia Tower at MLK Village,” Ebenezer wrote in the grant application. “The property includes 96 affordable units that have served the chronically homeless with mental disabilities since 2007. Ebenezer is the 99% owner of the General Partner in this property. The rehabilitation will be performed in collaboration with Columbia Residential, the 1% owner of the General Partner.”

The Ebenezer Building Foundation, however, has never disclosed its ownership of the MLK Village Corporation in its IRS Form 990s. Tax experts say the charity should be reporting its relationship with the shell company to the IRS because they’re run by the same people.

“The Ebenezer Building Foundation appears to be hiding from the IRS its relationship with the MLK Village Corporation because of the common officers between the two entities as well as with Columbia Residential because of the Foundation’s 99 percent interest in the general partnership with Columbia who owns the remaining one percent,” said Paul Kamenar, an attorney with the National Legal and Policy Center, a watchdog group.