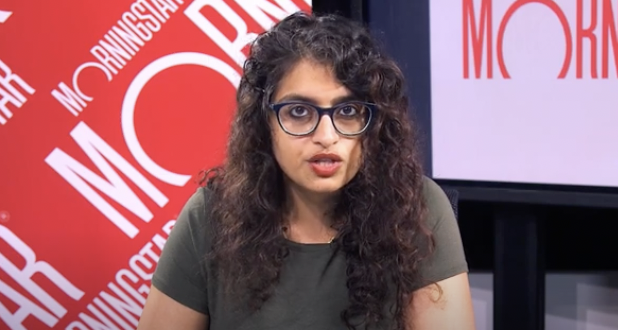 Last week a reporter for influential financial ratings and research firm Morningstar, Ruth Saldanha (pictured above), reported findings in a proxy season analysis of a so-called “anti-ESG explosion” of shareholder resolutions at the annual meetings of several major corporations.

Without contacting National Legal and Policy Center about its 25 proposals this year, Morningstar mischaracterized them as measures antithetical to the Environmental, Social and Governance (“ESG”) emphasis that has been widely embraced by Corporate America.

“In [Saldanha’s] apparent zeal to denigrate NLPC’s participation in the shareholder process, Morningstar dismissed the fact that nearly all of our resolutions addressed governance issues – that’s right, the “G” in “ESG,” said Paul Chesser, director of the Corporate Integrity Project for NLPC. “That makes them pro-ESG!”

Indeed, NLPC’s proposals at various times have been proposed in the past, with very similar language, by progressive shareholders who would be identified as “pro-ESG.” Of NLPC’s 25 proposals, six of them sought to split the Chairman and CEO roles; Eleven of them sought greater charitable donation disclosure; Four of them sought greater lobbying expenditure disclosure; and one sought greater board diversity. The other three also could have been proposed by progressives: One sought transparency from Alphabet about requests it received from the government to remove content from its platforms, and two of them addressed human rights and slave labor (Disney and General Motors).

“What about any of these proposals makes them ‘anti-ESG?’” Chesser wondered. “Why is good, transparent governance ‘pro’ when progressives present the idea, but ‘anti’ when conservatives present it? Morningstar can’t even point to anything in our resolutions’ supporting statements that screams ‘conservative’ or ‘anti-ESG.’”

Puzzlingly, Morningstar unintentionally admitted that NLPC’s proposals were really pro-ESG, by reporting, “Many of the [NLPC] proposals found language and phrasing that the Securities and Exchange Commission finds acceptable by copying earlier approved pro-ESG proposals.” Morningstar also stated that one of NLPC’s many proposals – to split the Chairman and CEO roles – was “reasonable, and many players, Morningstar Sustainalytics included, recommended that investors vote for the proposal.”

Nonetheless Saldanha – in her overall effort to paint the resistance to “woke” corporate policies as a failure – misled her readers, subscribers, and the business media about the nature of NLPC’s resolutions. Worse – and without contacting NLPC to learn more about its proposals – Saldanha smeared NLPC by characterizing its intentions as “disingenuous” and “insincere.”

“If shareholders had approved any of our resolutions and the companies implemented their measures, they would not have done so in a way that was advantageous for political conservatives or so-called ‘anti-ESG’ advocates – because that’s not what we asked for in our resolutions,” Chesser said. “Greater transparency and accountability represent good governance for all customers and investors — and again, these are measures sought many times in the past by progressive shareholders.”

Chesser added that Morningstar is not the objective research and ratings company — influencing hundreds of billions of dollars in investments — that many consider it to be. The finance firm is being investigated by Missouri Attorney General Eric Schmitt, under the state’s consumer protection and anti-“Boycott, Divestment and Sanctions” laws.

“I suspect what really upsets Morningstar and ESG advocates is that we have shown up on what they regarded as their conquered turf at annual shareholder meetings,” Chesser said. “I’m sure they don’t like the competition.”

Chesser characterized the proxy season overall as an amplified first-step for conservatives, and noted that nearly all “pro-ESG” resolutions presented to shareholders over the past several years have been rejected also. Nonetheless the progressive shareholders have won the overall “battlefield” by showing up year after year, by virtue of pro-ESG sympathizers overtaking the boardrooms and executive suites of every major corporation.

“Ruth Saldanha and Morningstar hoped we would be demoralized by the failure of our resolutions to pass, and I’m sure they wish we would just go away,” Chesser said. “But we are just getting started. See you next year!”